I’ve always struggled with learning in the classroom. The teacher talking sounded like indiscernible waves of noise, much like what is seen in the “Peanuts” strip. Really.

The problem didn’t have anything to do with teacher but me. I mean, there were ones who taught in a monotone voice or presented material far over everyone’s heads. But, I was the one and am the one who still has a classroom learning problem.

I eventually figured out ways to get by and do the class thing. Focusing, especially on subjects I didn’t care for, took a lot of energy and pretty much writing everything the teacher or professor said. Everything. The theory, the examples, the rabbit trails.

Sadly, I didn’t pick up on that skill, if I can even call it that, until late. Some time in college.

I learned early on in life that when I was bored out of my mind in school, I had to find something to do that wasn’t distracting or disruptive to others.

In math classes where I already mastered the material, I’d wear a hooded sweatshirt to cover my head and listen to music playing on my headset. The volume was low, so I could keep an ear out for what was happening.

Another little activity I did was write backwards with my left hand. Since I’m right hand dominant, that took some concentration and involved a different part of my brain. I was challenged, entertained, and less likely to yawn or appear otherwise offensive to the teacher. 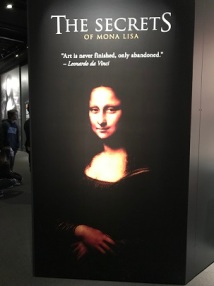 This past week, I went to see the Leonardo da Vinci exhibit at Denver’s Nature and Science Museum, and I was immediately captivated by several things.

Often, we do not pay much attention or help those who are poor. They’re the people in society that live on the fringes, unwanted and not cared for. His mom saw to it he got some formal education, where his brilliance was spotted.

In the 1400’s, getting pregnant and having a child while unwed was totally unacceptable. The mother and the child’s entire lives would have been hell, if anyone found out or if she chose to keep the child.

Yet, his mom kept him.

Awesome sauce. I’m nowhere close to brilliant or genius. Can’t even put a candle next to someone who painted so beautifully, designed seventy-some machine inventions, and had loads of other, equally impressive talents. But, we share writing backwards in common.

Not only when I practiced writing backwards did I often do it with my left hand, but I have two kiddos who are left-handed. And, figuring out how they process through things differently is important to me. Sometimes, for example, they approach things from right to left, instead of left to right.

My desire to write backwards has been rekindled, and I’m going to give that a go from time to time.

Here’s something I wrote over the last few days, in cursive with my left hand.

Can you read it? Maybe you could if I had written in print instead of cursive.

I’ve taken a mirror photo, so you have an easier time deciphering it.

What do you think?

What is something you’ve done that is out of the ordinary?

Maybe it’s different from what you’ve ever done.

What would you try doing, if you had the chance?

Follow WAM – Writing and Art in the Making on WordPress.com